Agreement on Trade in Goods signed under framework of CEPA
Friday, December 14, 2018

The Chief Executive, Mrs Carrie Lam, witnessed the signing of the Agreement on Trade in Goods by the Financial Secretary, Mr Paul Chan, and the China International Trade Representative and Vice Minister of Commerce, Mr Fu Ziying, today (December 14).

The Agreement is a new agreement signed between the Hong Kong Special Administrative Region Government (HKSARG) and the Ministry of Commerce under the framework of the Mainland and Hong Kong Closer Economic Partnership Arrangement (CEPA).

The Agreement consolidates and updates the commitments on liberalisation and facilitation of trade in goods under CEPA, and further enhances the level of liberalisation for trade in goods under CEPA. Starting from January 1, 2019, goods of Hong Kong origin imported into the Mainland will fully enjoy zero tariff through the enhanced arrangement for rules of origin (ROOs). In addition to the existing product-specific ROOs (PSRs), a general ROO based on the calculation of the value added to the products in Hong Kong is introduced under the Agreement, thus allowing products currently without PSRs to instantly enjoy zero tariff upon importation into the Mainland subject to the fulfilment of the general ROO.

The Agreement also establishes principles of trade facilitation, including stipulation of commitment of the two sides in facilitating trade between the two places, simplifying customs procedures, enhancing transparency of related measures and strengthening co-operation in the relevant areas, and in particular sets out measures to expedite customs clearance of goods with a view to facilitating movement of goods in the Guangdong-Hong Kong-Macao Greater Bay Area, thereby enhancing the customs clearance capacity and efficiency of the control points in Guangdong and Hong Kong. The Agreement came into effect on the day of signing and shall be implemented on January 1, 2019.

Upon signing the Agreement, the two sides have completed in advance the objective of promoting the CEPA Upgrade under the National 13th Five-Year Plan, thus enabling CEPA to become a comprehensive and modern-framework free trade agreement covering four major areas, namely trade in goods, trade in services, investment, and economic and technical co-operation.

Details and latest information on CEPA can be found on the Trade and Industry Department website at www.tid.gov.hk/english/cepa/index.html. 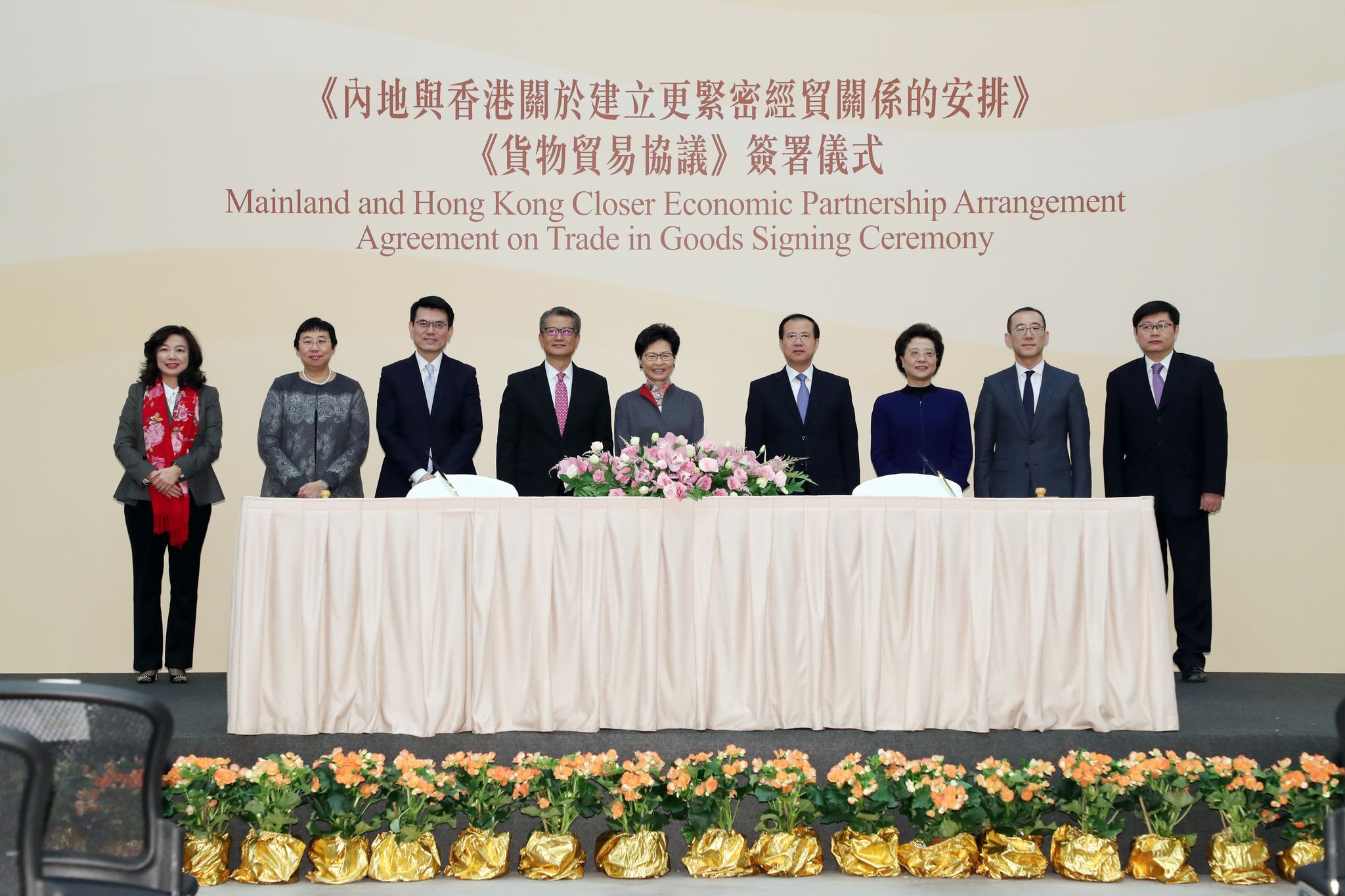 The Chief Executive, Mrs Carrie Lam, attended the Mainland and Hong Kong Closer Economic Partnership Arrangement Agreement on Trade in Goods Signing Ceremony at Central Government Offices in Tamar today (December 14). Photo shows (from left) the Director-General of Trade and Industry, Ms Salina Yan; the Permanent Secretary for Commerce and Economic Development (Commerce, Industry and Tourism), Miss Eliza Lee; the Secretary for Commerce and Economic Development, Mr Edward Yau; the Financial Secretary, Mr Paul Chan; Mrs Lam; the China International Trade Representative and Vice Minister of Commerce, Mr Fu Ziying; Deputy Director of the Liaison Office of the Central People's Government in the Hong Kong Special Administrative Region Ms Qiu Hong; the Director-General of the Department of Taiwan, Hong Kong and Macao Affairs of the Ministry of Commerce, Mr Sun Tong; and Deputy Director-General of the Department of Exchange and Cooperation of the Hong Kong and Macao Affairs Office of the State Council, Mr Chen Wei, at the ceremony.